A Thing and its Meaning 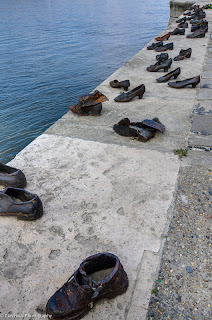 Strolling along the Danube promenade our first day in Budapest, we came upon a puzzling display of cast-metal shoes, clearly of the 1940′s vintage. They were fixed to the cement of the walkway and designed to look like the owners had just thoughtlessly left them there, cast-off and in disarray. There were men’s and women’s and small shoes for children. I thought it was an art installation of some sort. There are many of those in Europe, usually of a whimsical nature, designed to bring a smile. We played along with that thread and I had my traveling companions stick their feet in amongst the lost shoes while I took a few photos. 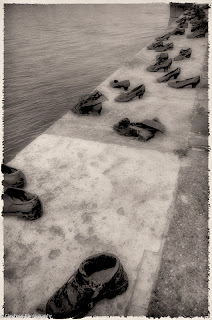 I was seeing one thing but not its meaning. They are a memorial and as such are designed to bring tears not a smile to the face. The sixty pairs of shoes represent the uncounted Jews (and their supporters) that were shot and pushed into the river during the Arrow Cross (Hungarian Fascists) terror of 1944-45.

I see the thing and now I cannot see it but for it’s meaning. What compels people to do such things? What were the victim’s last thoughts, standing naked and shivering, awaiting that bright flash. Incomprehensible. And though I am saddened by what it represents, we must also never forget, and for that, I am also thankful.
Posted by clayhausruminations at 08:41 No comments:

Mýrdalsjökull, Reynisdrangar and Dyrhólaey...oh my!

In our last post -- What's in a Name -- we left off with discussing Katla, one of the more violent volcanoes along the Mid-Atlantic Ridge. Capping Katla is the ~600 sq. km. glacier called Mýrdalsjökull. Looking at a map of Iceland you will see some some eleven jöklar (plural for jökull, which by the way is pronounced 'yokel', more or less, and other than that, has no resemblance to our local breed) scattered about the island. They cover about 11% of the country's landmass and a jökull is of course a glacier. However, due to global warming, all of the glaciers are in rapid retreat. The largest, at around 8,300 sq. km in size, is losing about 4 km. per year.

Now we know what a is but what is 'Mýrdals?' If you remember from the previous post, the coastal town of Vík is actually formally know as Vík í Mýrdal. The latter word translates into English as 'mire dale.' Those are two words you are more likely to run across in Lord of the Rings rather than Facebook, as they are the more antiquated forms of 'boggy' or 'swampy' or 'marsh valley.' Mýrdalsjökull = Glacier of the boggy valley and Vík í Mýrdal = bay of the marshy valley. The reason for all the mud is the fact that the region receives up to 90 inches of rainfall annually.

Close by Vík are a set of basalt sea stacks known as Reynisdrangar. They rise from the stormy north Atlantic sea like the petrified masts of some ancient man-o-war. In fact, there are three similar legends related to them and at least two feature a ship. The most colorful tells the story of three trolls -- Skessudrangur, Laddrangur and Langhamar (but I think of them as Larry, Moe and Curly) -- who, whilst trying to drag a ship to shore, are caught, turned to stone and frozen in time and place by the rays of the dawn's sun. The stacks are very photo-genic from either the black basalt sand beach to the east or the high cliffs of Reynisfjall, directly above. If the weather is relatively calm (all things being relative here), you can lie upon the edge of the cliffs watching the puffins wheel about in the void between you and the stone trolls.

From those same cliffs, much further to the west, a headland thrusts into the sea, with a quite large puncture mark in the rock. Dyrhólaey it is, meaning, "the hill-island with the door-hole." Tour boats will float through the opening and a stunt pilot is said to have flown through it as well. The cliffs are crowded by puffins and the view from the edge of the promontory is spectacular if not vertiginous.

A little ways inland and with a peaceful gaze at both Dyrhólaey and Reynisdrangar, is Loftsalahellir, "upper chamber cave." Before the Vikings began arriving in the 800's it is rumored that Irish monks seeking "green martyrdom" in the time of St. Patrick (6th-7th century) voyaged to Iceland to live solitary lives of hermits. No physical trace that I am aware of has been found of these monks. Perhaps their lives were so devoid of any physical comfort and artifices that all has been obliterated by time and the elements. Or, perhaps it is all just a myth. Regardless, an Irish monk was said to live in this cave, Loftsalahellir, sometime before the Icelandic Sagas place Viking council meetings there. Either way, it makes a lovely spot to have lunch as well as end this 'saga' of a blog post.

Bless í bili
Posted by clayhausruminations at 09:38 No comments: